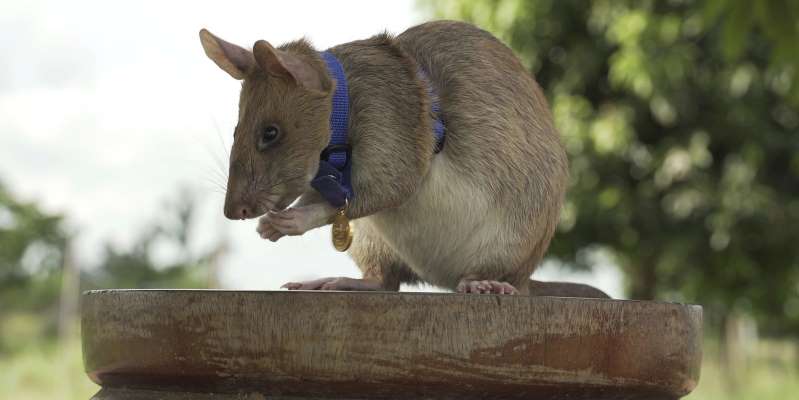 One small mammal is responsible for helping clear unexploded ordnance and undetonated land mines out of more than 35 acres of land in Cambodia, and today he was awarded a medal commemorating the achievement.

Magawa, a giant African pouched rat, was awarded a civilian award for animal bravery by the People’s Dispensary for Sick Animals on Sept. 25. It’s the charity’s highest civilian honor and, according to The Associated Press, is equivalent to the George Cross, an award given to British civilians or soldiers who perform “acts of the greatest heroism or for most conspicuous courage in circumstance of extreme danger.”

In the past five years, Magawa has found 39 land mines and 28 items of unexploded ordnance, clearing more than 141,000 square meters of land and making the areas safe for local communities.

Magawa, whose official job title is “HeroRAT,” works with APOPO, a Belgian organization that trains rats to find land mines. It’s estimated that 4 to 6 million land mines were laid in Cambodia since the 1970s, with at least 3 million still unaccounted for.

Accidentally triggered land mines have caused 64,000 casualties in the country, according to the People’s Dispensary for Sick Animals, and the country has the highest number of mine amputees per capita in the world, with more than 40,000 people having lost limbs to unexploded devices. APOPO also operates in Angola, Zimbabwe and Mozambique.

Magawa uses his sense of smell to find land mines, following the scent of the chemicals used to build the device. Once he detects it, he signals the exact location to a handler who can dispose of the bomb safely. According to a press release from PDSA, he “completely ignores any scrap metal lying around and is so much faster at finding landmines than people would be.”

“He can search the area of a tennis court in 30 minutes, something that would take a human with a metal detector up to four days,” the release continued. “On a daily basis, HeroRAT Magawa’s work is life-saving and life-changing and has a direct impact on the men, women and children in the communities in which he works. For every landmine or unexploded remnant he finds, he eradicates the risk of death or serious injury in locations already suffering significant hardship.”

“Magawa passed all his tests with flying colors, and it wasn’t long until he was sent to work,” said the press release. “For each landmine that HeroRAT Magawa finds, he saves a life.”

Magawa is the group’s most successful rat, according to the organization. He’ll “carry on making Cambodia safe until he retires to his ‘home cage.'” Once that day comes, he’ll spend his retirement playing and relaxing.